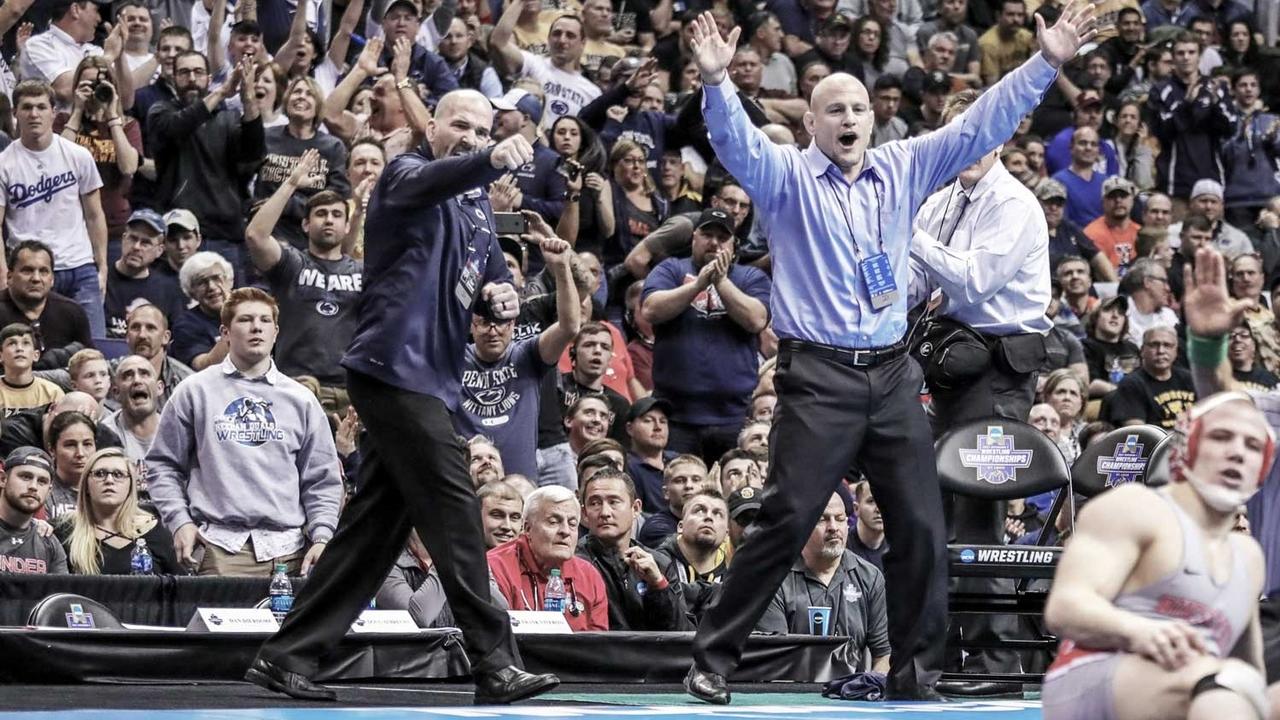 15 national championships, that's what Iowa accomplished under the Dan Gable era. Gable took that program to unseen heights, something that had never been done before in that school or the sport’s history. He became a legend through the way he coached. Jim Zalesky, a 3x national champ, was poised to take over the reign of that position after Gable had vacated it. Zalesky won 3 straight national titles with Iowa, but then couldn’t figure out how to win another one for the next 6 years. At which point the reigns to the kingdom were passed onto Tom Brands. And it was the right choice. Tom brought in Terry(his brother) and together Iowa was back to winning national titles like the old days. They won 3 in a row from 2008-2010.

But then along came Cael. Another Iowa state (like Gable) alum, except this time Iowa state made the right decision and made Cael the head coach (they failed to do so with Gable, saying he was too young).

Cael was always in the shadows of Gable and Brands and the Hawkeye’s dominance; he just couldn't get it done at Iowa State so he took the Penn State job. Pennsylvania is the hotbed for wrestling in America. If you look at the national tournament, 49 qualifiers were from that state and 5 of them made it to the finals. There are 11 Division 1 programs in PA too, so there's a lot to choose from.

But there's only 1 Big Ten school and 1 Olympic champ coaching out of all those d1 schools so Cael gets the best talent, the pick of the litter.

Cael’s big saying is that if you don't constantly work to evolve you'll learn a quick and painful lesson from someone who has. Well, Iowa is learning that painful lesson. Finishing 4th as a team isn't bad at the NCAA tournament by any means, certain teams would kill for that, but according to Iowa’s standards, it's subpar. Only 1 champion, and only 1 Olympian this past year is not acceptable from a storied program. The Iowa style is simply getting out evolved.

The way I see it is there are 3 storied programs in wrestling. Oklahoma state, they've dominated like no one else has. Winning 34 national titles, the most of any school. Their record extends beyond the days of John Smith and his legacy. But once he came along, they dominated even more. Getting 5 national champs in 2005. Winning 4 national titles in a row under Smith from 2003-2006. After Smith’s run, Brands was able to take over with the Iowa style, winning 3 in a row for the Hawkeyes from 08-10. But now there's a new sheriff in town and that's Cael Sanderson.

We know the Iowa style, we know the Oklahoma state style, but what's the Penn State style?

Iowa is to grind it out, push forward at all costs, break the guy. It's evident by Gable’s famous statue of him holding up the stalling sign. If you could get a guy to stall because of his fear of wrestling you, that's one of the greatest things next to winning. He'd even call stalling on his own guys if they weren't wrestling to his expectations.

Conversely, the Oklahoma state style is technique. John Smith, we all know, was infamous for developing his low single and dominating the world with it. Everyone knew it was coming, but no one could stop it. He said he was like a mad scientist going to practice everyday evolving one of the greatest inventions to the sport. And now there's a coach who has further evolved the sport of wrestling.

Cael has once again transcended the sport of wrestling to new heights, with 5 national champions this year and winning the team title 6 out of the last 7 years. He has set a new standard of dominance in our sport. Going 159-0 in college, and winning an Olympic gold medal, he is no stranger to success himself. At Penn State, he creates a culture of creativity and competitiveness. I can't attest to how he coaches every day, but I do know from all the interviews of the wrestlers that they love to have fun, score points, and be creative. Too often now, we see wrestlers taking things too seriously. But as Retherford said after his finals win, he was saying to himself the whole time (from Braveheart)

You can take away our lives but not our freedom

All he wanted was the freedom to express himself how he knew best. Too many wrestlers are timid, wrestling to 4-2, 4-3 matches and just relying on one takedown to win it. But every single Penn State wrestler seemed to have just want to dominate and create moves and have fun. David Taylor even said it's a game when he was competing. Unlike all the wrestlers who say "wrestling is not a game and we don't play" it seems wrestling is evolving once again. And not from the Iowa “grind it out, heavy hands” style or the Oklahoma state “perfect technique”, but the Penn State “have fun and let loose” attitude. And the bottom line is, it's fun to watch and great for the sport.